A bug in TestArchitect is a failure in an automation run which impairs or prevents the proper functioning of the automated test, and which can generally be attributed either to a bug in the application under test, or to a problem with the test itself. From hereon, any such bug is referred to as a TestArchitect bug, or TA bug.

Tip:
For more details on how to work with TA bugs and integrate them with the JIRA bug tracking system, see JIRA integration

A TestArchitect bug workflow is the set of stages that a TA bug goes through during its life cycle. The following diagram depicts the workflow:

Users of bug tracking systems, such as JIRA, may be familiar with the concept of interim resolution statuses, for example Duplicate, Incomplete, or Cannot Reproduce. A TA bug, by contrast, has only three statuses: Open, Closed, or Reopened.

Each TA bug has a status indicating where the bug currently is in its life cycle. A bug starts as being Open, then generally progresses to Closed. Depending on circumstances, it may further progress to Reopened and then Closed again.

On the other hand, unregistered bugs are created in TestArchitect but not associated with a bug on any external bug tracking system. Refer to Creating unregistered TA bugs.

Detailed information regarding a TA bug (that is, registered or unregistered) is listed in two tabs of information. One is the Information tab which contains general information on the bug. The other is the Related Items tab, which lists those test modules which expose, or “catch”, the bug. 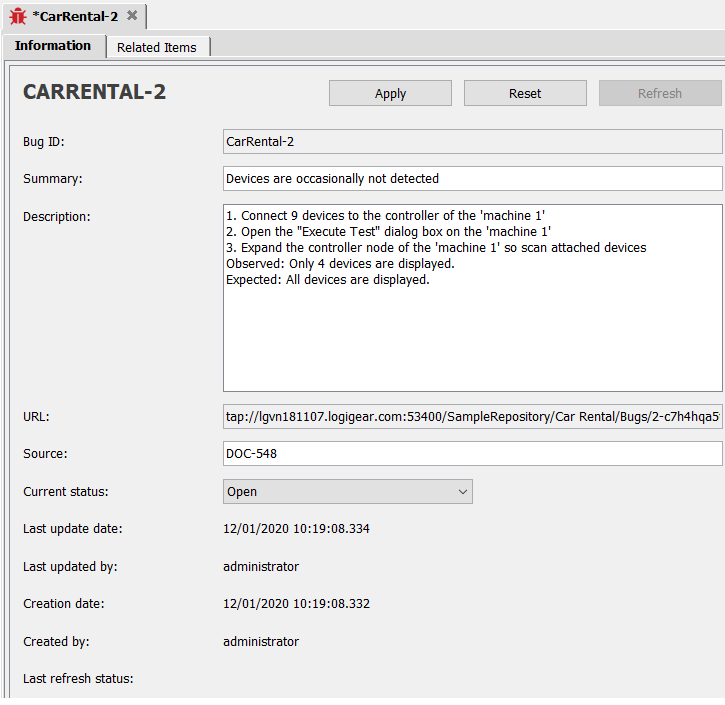 The fields of the Information tab are:

The fields shown in the above screenshot are:

Working with known bugs
Known bugs indicate where fails in a test have been recognized so that those fails are ignored in subsequent automation run results. The Ignore known bug feature helps you obtain test results from test runs that are not cluttered up with fails from known bugs, thus rendering the results easier to analyze.

Deleting TA bugs
TA bugs can be removed from the system once they have been addressed.