Any action line that interacts with an AUT has one or more arguments that specify a window or control. Generally, we populate these arguments with static identifiers, which you know better as TA names, and which are created in the form of interface entities and their constituent interface elements.

Static identifiers have set values, established in interface entities before your test is run. The problem is, there may be times when you want your test procedure to control which UI element a given action is directed at. You can accomplish this with dynamic identifiers.

The static identifiers created by interface elements are useful for application windows that have a consistent appearance in terms of the controls that populate them, and the properties of those controls (or at least the properties that are used for mapping). They fall short, however, when it comes to mapping controls or elements that are dynamically created by an AUT.

To compound the problem, such controls are often created in amounts that cannot be known in advance. A typical example is a search on a web page that presents its matches with hyperlinks. The better alternative is to use dynamic identifiers, in which you explicitly specify the class of the control and the values of identifying properties within the actual action lines of a test module or action.

A dynamic identifier is surrounded by a pair of square brackets ([ and ]) and contains a set of one or more TA property-value pairs (property names and their values), separated by commas. In the case of controls (but not windows), the list must also include a TA class-value pair:

You can use a dynamic identifier wherever you use a logical TA name. As an example, take the following (conventional) login actionfor the Car Rental application, whose static identifiers are defined in the interface entity below it: 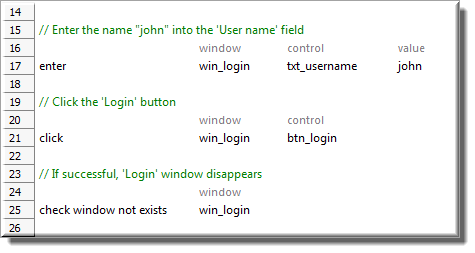 The following action, which uses dynamic identifiers to identify the controls, functions in an identical manner:

So, we’ve established that dynamic identifiers are great for people who are too lazy to create interface entities. But what else are they good for?

One way in which the power of dynamic identifiers can be exploited is in the fact that they can be constructed “on the fly” by means of expressions. In particular, concatenation expressions that include variables can be very useful.

As an example, the following test case uses a variable-based dynamic identifier to cycle through global pos values. The outcome of the procedure is a report of the number of buttons in an AUT window, which the test is able to perform without knowing anything about those buttons (that is, no identifying property values), aside from the fact that they all have a TA class of button: 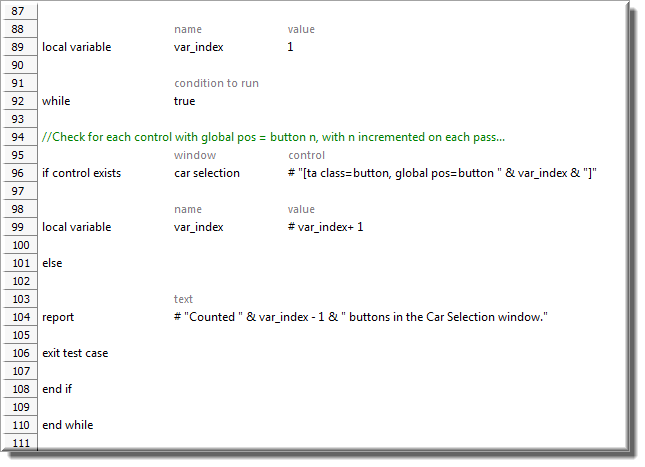 Most typically, it is a control’s anchor pos that is used as the operational property in a multilevel dynamic identifier, as the nature of anchor pos lends itself to the identification of controls through multiple levels of a window’s control hierarchy.

you might prefer the clarity that comes with decomposing that complex action line into the following, which is functionally equivalent: