Debugging blindly can be tedious work, especially when your test tool does most of its work through the user interface. Moreover, bugs can sometimes be hard to replicate when single-stepping through a test procedure. To address this problem, TestArchitect allows snapshots to be automatically taken of the AUT’s display at various critical points during test execution. By letting you observe the display state of the AUT at each stage of the test, you can have a better grasp of where and how a test, or application, is going wrong.

Suppose you executed a long automated test that contains a good deal of interaction with the interface of the application under test, such as mouse clicks, keyboard input, menu item selection, etc. When viewing the generated test result, it may be difficult to understand why some fails, errors or warnings have occurred. It might be easier to identify the problem if the test result were accompanied by snapshots of the screen’s display just before, during and after any interactivity between the test and the AUT’s UI. This is the function of TestArchitect’s screenshot recording: it captures screenshots during test automation attendant with each UI-interactive action. These screenshots help you better visualize what took place and more easily debug many of the problems that occurred.

With screenshot recording enabled, TestArchitect captures screenshots during test execution. It effectively snaps pictures for each UI-interactive action and posts all or some of them to the local test result.

Important:
Due to the potentially huge size of a full set of captured screenshots, TestArchitect handles the captured images in the following manner:

See below for a full discussion of the rules regarding screenshot retention.

Screenshots captured during testing are displayed in the Result Details and Failure/Error Summary tabs of local test results.

Remember:
The Result Details tab is only available when local test results are viewed on a web browser. 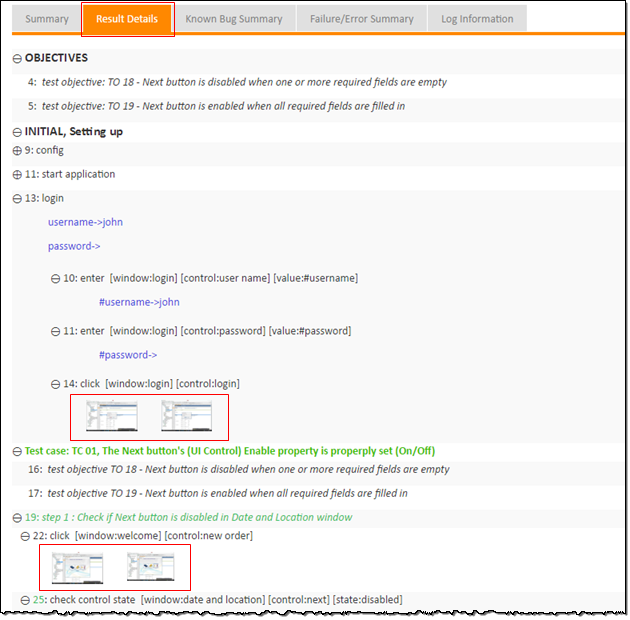 On the web browser, when you click a captured screenshot in the Result Details tab, the screenshot viewer, appears. The screenshot viewer incorporates a number of functions (below).

TestArchitect doesn’t only snap pictures. When you have screenshot recording enabled. TestArchitect creates a video of snapshots from important points during the test and stores it at the end of the test run as a video (.mp4) file on your machine.

Screenshots are useful for debugging, but one problem is that TestArchitect generally must capture a screenshot before it can determine whether or not it provides useful information. For example, it’s only when a check window exists action fails that you suddenly have a need to know what the screen looked just before the click action that preceded the check. Hence the automation must capture a lot of screenshots, but it also makes it a practice to “thin the herd” as it proceeds, removing all unnecessary images.

The rules are as follows: