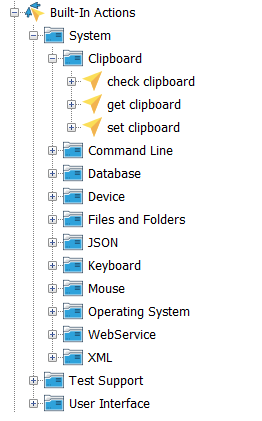 Tip:
When writing your test, if you do not know which built-in actions to use, it is suggested you use the TestArchitect Action Recorder, a tool to record your manual mouse and keyboard operations when testing an application. The interactive operations generate the corresponding built-in actions.

System actions
System built-in actions include those which allow your test to interact with the host operating system of your test automation, and perform other miscellaneous functions.